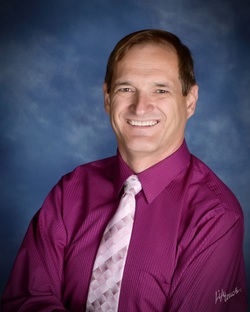 To learn more about Rev. Dr. de Vries, go to FaceBook,  Linked-In, or his blog.
FROM THE PASTOR
​
For roughly two decades, beginning in 1958, Old Union Presbyterian Church was home to a men’s gospel quartet known as The Men from Mars.  The group was very well-known in our region, and even today most people from that generation continue to speak of the group with fondness.  The Men from Mars performed on the radio and recorded two full-length albums and a 45 (for those of you under the age of 40, a 45 was a small record that only had a couple of songs on it).  The group received national attention and had the potential to become a professional group if its members had wanted to.  Speak with me if you would like a CD or mp3 recordings of their music.

As you listen to their music, it’s easy to pick out the high notes sung by first tenor Ross Karnes, who had been the church’s pastor when the group began.  You can also appreciate the deep bass voice of George “Jiggs” Fiel.  And of course you’ll enjoy the fine voice of lead singer and soloist, Lester K..  Otto Kalmeyer provides the piano or organ accompaniment to their songs.

One voice that is very hard (at least for me) to recognize in their rich harmonies is the one surviving member of the group who is still part of Old Union: baritone Ray “Zeke” K..  There are a couple of songs in which his voice comes out for a line or two, but otherwise he blends in with everyone else’s voices so well that I can’t pick him out.

One might be tempted to think “Well, if we can’t hear Ray in the songs, he must not have mattered much.  The group could have done without him and been a trio instead.”  Were you to think along these lines, you’d be gravely mistaken.  As I told Ray at his brother Lester’s funeral earlier this year, he had the most important part of all to play in the quartet.  Without Ray, nothing would have held together the voices of the other three members of the quartet.  He provided the glue or the backbone that held all the singers together in a way that enabled them to create such beautiful music.  Lester and Ross and Jiggs may have gotten praise for their individual voices, but that’s all they would have been without Ray.

Life in our church can be similar to the Men from Mars music.  There are certain prominent, easily-recognized roles that some people play: pastor, committee chairs, musicians, session members, deacons, and so on.  We are the “Lesters” of the church who get the attention and the notoriety.  But the most important roles in our church are the ones like Ray’s part in the quartet: rarely noticed or recognized, but critical for the group to keep together.  Like him, they are the glue or the backbone that allows all of us to be able to work together as a church family.  Without the contributions and presence of those who blend us all together into a marvelous harmony, the life of our church would be empty and fractured.

When you see Ray next, thank him for his gift of music, and for the model he provides for unnoticed but powerful ministry.