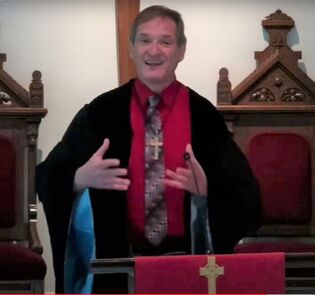 
Series of sermons about children: lesser-known or considered passages
at first blush, may wonder what today’s passage has to do w/ children at all
San Anton: new research on Is 49, soon to be published: you heard it here 1st!


2nd half of Is written while God’s people in exile, after Baby conquered J’lem
after crushing defeat & disappointment, message to instill hope
encourage to trust God’s good work in future
49 rolls out w/ wonderful promises of blessing: I will answer you and help you
captives will be set free, no longer deal w/ hunger, thirst, desert heat
will create highways for God’s scattered people to return home
God’s assurance to his troubled people reaches climax in v. 13:
“Shout for joy, you heavens; rejoice, you earth; burst into song, you mountains!
For the Lord comforts his people and will have compassion on his afflicted ones.”


But response from God’s people less than confident: level accusation against God
nation personified as Zion (location of J’lem): you have forsaken us, abandoned us
ie we are living in difficult times, and we have no evidence of your love for us
perhaps sentiment are familiar w/: endure circumstances in which God seems absent
many of us in “COVID burnout:”  all we see is hardship, calamity, loss, emptiness
all we feel is sorrow, confusion, sadness
Zion’s complaint: my parents have abandoned me: deserted me like an unwanted child
word “forsake” used to describe parents unable to care for their children


Rest of Ch 49 is God’s response: he’s a Marine: slogan “leave no man behind”
God offers even stronger image: love of mother for child
what mother would not do everything she could for her children?
no offense to fathers, but mother-child bond esp strong
Mat 7:11: fathers know how to take good care of children, but mothers even more so
can you imagine a mother giving up on her children?
forgetting them, abandoning them, failing to treat w/ love & compassion
unfortunately, we know of some sad exceptions, but image is strong
those of you who are mothers can relate, all of us who have mothers understand
more likely for mother to turn back on baby in her arms than for God to forget his people


Come to interesting line: “See, I have engraved you on the palms of my hands”
God in essence tattoos us on his hands, as constant reminder of his love
like finger on ring: ready & constant reminder of marriage bond & love
easy for us Xns to understand as prediction of what X would do
engraved his love for us on palms, w/ marks made by by nails that hung him to cross
X’s cruci is our greatest assurance of God’s love
can never say he has abandoned us when bear in mind what he has done for us
offered very life for our salvation
Great, but not necess what passage about: some problems w/ this interp
don’t find other examples in Bible of marking hands
if going to mark hand, usually back, not palm
alternate way to translate “I have engraved you on the palms of my hands”
Hebr ambiguous: no “my,” palm of hand could also be sole of feet
so could be: “Around the soles of your feet I have made an engraving of you”
at 1st blush, why pick this way to trans? doesn’t seem to mean anything
until learn about practice in ancient world of that time


Child abandonment common in ancient Mesopot (where in exile)
hoped for boy, got girl; or too many mouths to feed (happening in Afghanistan now)
some rescued through adoption: to care for in old age, be heir & continue family name
adoption procedure inc sealing documents w/ child’s footprint: feet linked to person’s ID
mother claims abandoned child as adopted daughter by having feet imprinted in clay
eg description from time: “in the presence of witnesses, he impressed his foot in clay, and they sealed the size of his foot with the seals of the witnesses.”


Meaning? God has reclaimed his/her children
may feel forsaken, but God will claim you, welcome you back
more than psych bond mother has w/ child: legal commitment
making engraving of sole of foot, means adopting them


Passage goes on to talk about more & more children: not only Isr, but other nations
God will gather his people from all over: adopt from every region of known world
take people who don’t belong to him, who have no claim upon him
chooses to bring into household, share life, place at his table
will adopt so many people, will run out of room
image of Zion shifts from motherless child to childless mother
I’ve been bereaved: children taken from me, but now gathered together


What was promised through Is fulfilled through X
John 1:12-13: those who believe have right to become children of God
1 John 3:1: See what great love…what we will be as God’s children not yet known
Ro 8:14-17: HS t’forms from God’s servants/slaves
(no permanent place, no privileges or rights, live in fear)
into children: are adopted: call God “Abba”


When adopted, gain privileges & rank of new family
eg Gaius Octavius distant relative of Julius Caesar: adopted as son & heir
as Caesar Augustus went on to t’form Rome into empire that lasted for centuries
Rom 8:17 incredible promise:
greater even than becoming emperor of mighty earthly empire
because adopted by God, co-heirs w/ X: all that is X’s is ours
share in his suffering, yes: don’t whitewash: called to crucifixions of our own
better way to understand suffering: not abandoned by God, but suffering w/ X
but also to share in his glory
don’t just get to go to heaven: rule w/ X there: simply can’t wrap mind around
Old Union Presbyterian Church | 200 Union Church Road, Mars, PA 16046
​724-538-8672 | OldUnionChurch@gmail.com
200 Union Church Road, Mars PA 16046